The first Republican National Convention (RNC) to be streamed live online established a new Ustream record for most views of a single event.  The total unique viewers (live and recorded highlights) during the RNC (Sept. 1-4) was 7,016,000.  The convention attracted 1,593,000 unique live viewers and 5,423,000 unique recorded highlight views.

Here is one of our favorite moments that Ustream captured during the RNC:

“Ustream gave the RNC the ability to communicate with the American public and our party members in an engaging way that has never been done before in previous elections. We were able to showcase the convention in the highest quality online and reach out to voters who couldn’t be live at the convention,” said 2008 Republican National Convention Spokesman Matt Burns. “We appreciate that Ustream brought mass exposure to our stream with distribution through Google News, large national blogs and news sites around the Web.”

Thanks to the RNC for partnering with us to give all Americans unprecedented live access to a political convention.

This being the start of our seventh day at the Republican National Convention, its no surprise that Brad and I have bumped into some very powerful people. It was only the other day that we noticed Mitt Romney was staying in our hotel (no wonder there was always Secret Service in the elevators).

We’ve met powerful people, we’ve met Ustream broadcasters, and I was tackled by Secret Service (Pshh but you probably don’t want to hear about that…right?).

I find it amazing that at the RNC, at the largest Republican gathering in the world and possibly one of the biggest events of the year, we are running into Ustream broadcasters left and right. They’re everywhere! The first day while we were setting up, an ABC employee walked up and thanked us for an awesome product. He uses us! Who knew? We also met Ustreamers such as Martin Roland (CNN Correspondent) and Ed Morrisey (Hot Air). Its really hitting home that Ustream is a powerful tool that real people are using to get their message out and change the world.

While we’re here working hard to bring you the best quality streams from the RNC, you can check out our RNC landing page for all the live streams and their embed codes. Aside from that, make sure to check out our backstage pictures below (If you want to know why Secret Service tackled me you’ll have to beg me in the comments):

This is a repost from the Official Google Blog:

The Republican National Convention is underway in St. Paul, Minnesota, and Google News is taking you there. Well, maybe not literally there, but as close as we can get you! For the duration of the convention, you can watch live streaming of the activities on a player located on the special Elections section of Google News. (It’s also embedded just below this sentence.)

We’re working with Ustream.tv to stream the coverage live at the following times:

If you miss some of the speeches, highlights from the convention will be broadcast at other times all week long.

I’m excited that I can watch the convention, alongside ongoing news coverage, from the first balloon to the last confetti.

Guiding countless artists and musicians through the live broadcast experience, you learn a tip or two regarding the science of a successful broadcast. There are a few elements involved that really contribute to a successful music broadcast: content, interactivity, promotion, and most importantly, distribution (aka embed syndication). Half of my job entails that our featured broadcasters hit on as many of those criteria as possible.

Enter Amalgam Digital. The indie online record label with a penchant for innovative online initiatives put together a pitch perfect broadcast event for their newly acquired star talent, rapper Joe Budden. Once upon a time, Joe Budden was a Grammy-nominated, major-label artist with a monster single in heavy rotation.

Half a decade later, Joe Budden and the Amalgam Digital team organized a broadcast event that far outperformed most of the bigger name, currently “hot” artists that have passed through the broadband walls of Ustream.TV.

Here’s how they did it…

Content:
The concept was simple but effective: Joe Budden would start the broadcast with a Q-and-A webchat, then segway into the final studio session as he worked on the finishing touches of his upcoming “Padded Room” album. This works on several levels:

1.) Interactivity: Live video allows for real-time interactions — take advantage of it. Viewers can watch recorded content anytime they want and leave one-off comments, but there’s only one chance to BE a part of the content. Give your fans that in-the-moment excuse to show up on time.

2.) Exclusive peak at the creative process: Watching two hours of someone’s workday can be boring if it’s pre-recorded. But there’s a certain magic to hearing snippets of an anticipated album for the first time, especially AS it’s being created. Give your fans a chance to say “I was there when…”

3.) Stamina: Broadcast events are like real-world music events; sometimes folks show up late. Joe Budden planned on going 3+ hours, giving his fans plenty of time to gather around and build viewership momentum. Too often, artists shut off a broadcast after chatting for 30 minutes, leaving their fans hanging at the peak of their interest. Give your broadcast a breathing chance to go viral… go for the distance!

While the Budden event was clearly a one-off, I should also mention that regularly scheduled programming also plays well over live video.

And that’s content for ‘ya… let that marinate as you cook up some creative inspiration.

If a tree falls in an empty forest, does it make a sound?

Amalgam Digital did a great job making sure that forest was full of people. Two days before the broadcast, Amalgam sent out a press release announcement to their network of bloggers and online pubs. Pitching it as an innovative live broadcast event that it was, several online publications bit: 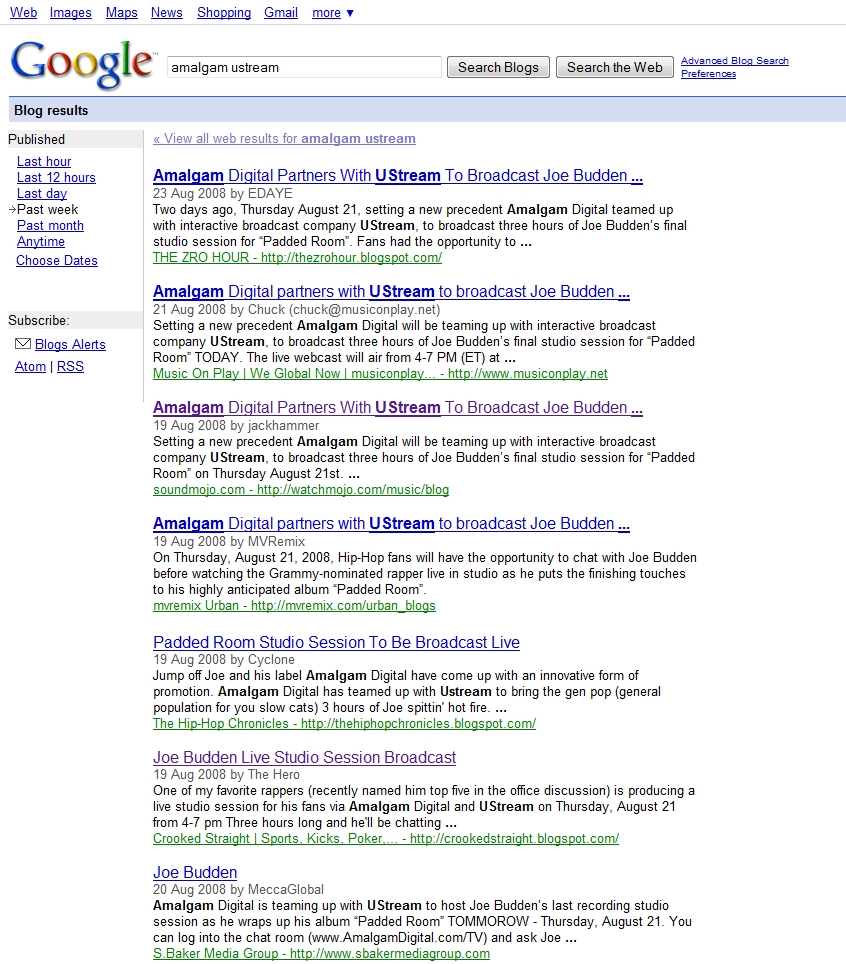 … and Purevolume and Facebook and Virb and blogs and websites and label sites. Make blasts, embed onto your profile.

Get creative. Ask your fans to take embeds and throw it up wherever they can. Give out an autographed CD to the fan that embeds and blasts on the most amount of websites, blogs and landing pages.

But more than just getting the word out, Amalgam took the next critical leap and hooked uber hip-hop blog Nahright.com to syndicate/embed the entire experience from it’s own eyeball-heavy domain: 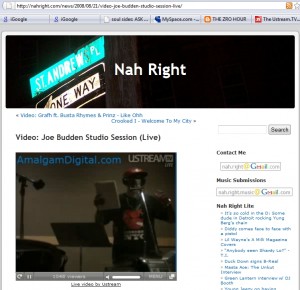 Once it hit Nahright.com, a trail of copycat blogs picked up the syndication embeds, effectively creating an instantaneous viral trail on a LIVE event! Check out some of the stops on the trail:

Sometimes broadcasters get protective over their content and their own destination sites. Indeed, 90% of the Budden studiocast was viewed via embeds outside of the Amalgam/Ustream domain.

Ask team Budden yourself, and they’ll tell you that embedded distribution via Nahright was directly responsible for their record-smashing traffic on AmalgamDigital.com. Taking advantage of Ustream’s hyperlinkable text overlays (see below), Amalgam brought Joe Budden front and center to where the eyeballs were already glued. The in-video hyperlink overlay effectively converted those viewers who were already hooked: 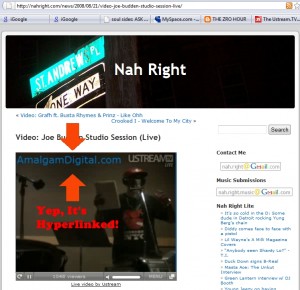 Lesson being, be very open about your content. Don’t have access to uber-bloggers? Start with the sites you have control of. Post and embed on your Myspace and Purevolume accounts, your blogs, your sites, etc. Give your fanclub or street team the embed codes, and let them go wild tagging up the clean white walls of the internets. Send out text message blasts to your friends.

Point being, go directly to where the eyeballs are at. Attenion spans are short these days, so fid ways to reduce the amoun of clicks it takes to get to your show, and you’re golden.

Digital Amalgam smashed their previous single-day traffic numbers, translating into a spike in pre-order sales for their digital music storefront. With an ounce of creative vision and a dash of inspired execution, Jay and Felix over at Amalgam Digital took advantage of Ustream’s gratis platform to the fullest, garnering the type of Buzz and PR normally reserved for big budget marketing campaign.

Do you have the next killer idea for your artist or music event? I’d love to hear it out and help you execute. Shoot your idea and contact on over to music . Let’s make it happen!