Today’s guest blog post comes from our friends at Indie Music Billboard, care of Bobby D in Costa Rica. His webcasts have focused on promoting, developing and inspiring human potential. He has empowered thousands of individuals from all walks of life in 50+ countries to achieve a life of freedom. Check out his Ustream channel

Rarely does any segment of the massive music industry garner as much excitement as Indie Musicians, Indie Radio Stations and Indie music lovers.

Sure we all love our favorite artists. Of course we swoon over their latest CD or single. Naturally we gravitate to listen to them. But, there is nowhere in the worldwide music industry that has the excitement and following as does the Indie Music genre.

Indie Music brings all three elements together, Artists, Radio stations and of course the music. END_OF_DOCUMENT_TOKEN_TO_BE_REPLACED

1. Ignorance is bliss — until you miss the boat

The more you use live video, the more you realize the value it can have for your business. Consider how the more frequent users strongly agree with the statement below: 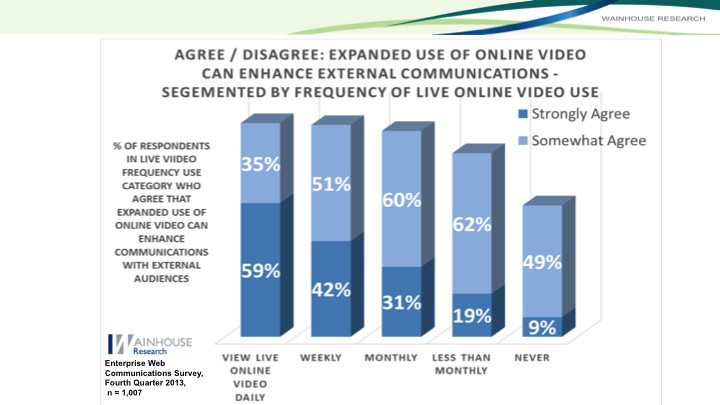 END_OF_DOCUMENT_TOKEN_TO_BE_REPLACED

This week’s guest blogger is Cali Lewis: What do you get when you mix one part Bill Nye and two parts Fembot? Cali Lewis! You may have seen her co-hosting ‘Call For Help’ with Leo Laporte, or perhaps you’ve seen her reporting on BBC, CNN, MSNBC or Fox. She’s the co-star of GeekBeat.TV, and her millions of fans will tell you – she’s a little bit country, AND a little Rock n’ Roll! Find her on Twitter @calilewis

Who has 8500 square feet of oxygen rich space, robots roaming the halls, and the biggest Infinity Wall this side of the Rio Grande? The Geek House that’s who!

It’s time for yet another big milestone for the team here at GeekBeat.TV! We started in a small bedroom in Dallas, quickly moved to a leased 2500 square foot office space to OWNING an 8500 square foot epicenter the audience has dubbed the Geek House!

And now, on August 1st, 2014 at 4:00 PM EST, it’s time to show the galaxy why the Geek House is Disney World for Geeks! We literally have people coming from all over the world to be part of the experience, and we’ll be unveiling some very geeky, super secret features of the Geek House!

And guess what? YOU can be part of the experience, without having to come to Dallas! Just join us on our LIVE stream on Ustream.tv at http://geekbeat.tv/live – we’ll have our chatrooms throughout the entire building during the show so be sure to chime in with your thoughts and questions! END_OF_DOCUMENT_TOKEN_TO_BE_REPLACED