On that night, skywatchers in most areas of the world will enjoy a special treat: the first “supermoon” eclipse since 1982 — and the last we’ll see until 2033.

NASA will bring you live coverage of the event through its Ustream channel beginning at 8 pm EDT.

What makes this eclipse “super” is that it’s occurring at the stage in the moon’s orbit where it’s closest to Earth, called the perigee. If you’ve ever looked into the night sky and noticed the moon appearing much larger and brighter than usual, you were probably seeing the moon at perigee, also called a “supermoon.”

In a lunar eclipse, the sun, the moon, and the Earth align so that the moon passes into the earth’s shadow. While these eclipses aren’t particularly uncommon, it’s quite rare for a total lunar eclipse to coincide with a supermoon — only five have occurred since 1900.

The eclipse will be visible in North and South America, Europe, Africa, Western Asia, the Eastern Pacific Ocean region and here on the Ustream channel. The moon will begin dimming slightly at 8:11 pm; the total eclipse will start at 10:11 pm and will peak at around 10:47 pm (all times EDT).

Remember, you can catch all the action live on nasa.gov or on NASA’s channel on Ustream.tv.

Today, Ustream launched a new sleeker, more intuitive player with controls and graphics rendered in HTML5. The new player’s responsive layout automatically adjusts the player size to optimize viewing experience and access to player controls based on the viewer’s device. 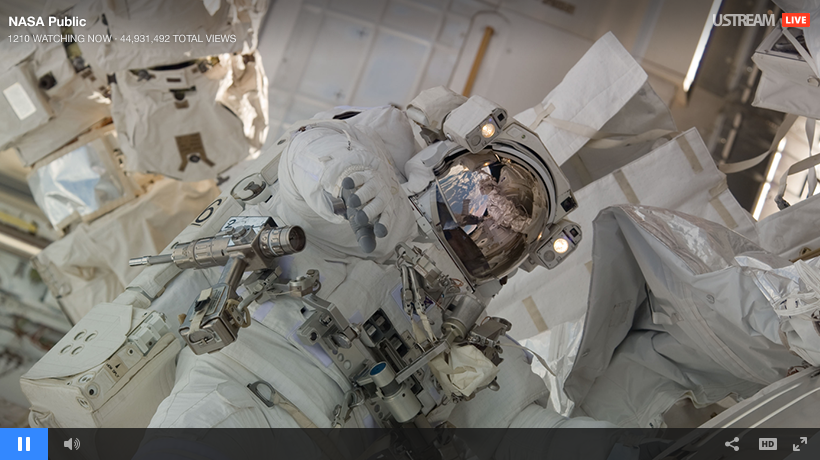 In addition to the change from Flash to HTML5 here’s a look at what is new in the player interface:

The new player will be used on Ustream channel pages and newly generated embed codes will automatically use the latest version of the player.  Visit the Ustream Support Center for more details on the new player.