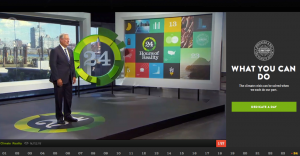 Sure, we’ve all heard the bad news about climate change: it’s here, it’s huge, it’s devastating, and it’s not going away anytime soon.

Ever wonder whether there’s any good news around this global phenomenon?

Well, there is. On September 16–17, 2014, the Climate Reality Project broadcasted live streaming video on Ustream for 24 hours straight, sharing 24 reasons to be hopeful about the future of our planet. 24 Reasons for Hope is the fourth event in the Project’s annual 24 Hours of Reality series dedicated to sparking action on the issue of climate change.

Each hour of the event, hosted on the Climate Reality Channel, focused on a different reason to be hopeful about our future and encompassed presentations from Project Chairman Al Gore, town-hall meetings, musical performances from acts such as Linkin Park and Jack Johnson, and other features. Among the 24 reasons presented were:

The 24 Reasons for Hope channel on Ustream drew more than 16 million views — 8 million unique views — in countries around the globe.

To learn more about the event and to access recordings from the live video stream, visit 24hoursofreality.org.

This week’s guest blogger is Cali Lewis: What do you get when you mix one part Bill Nye and two parts Fembot? Cali Lewis! You may have seen her co-hosting ‘Call For Help’ with Leo Laporte, or perhaps you’ve seen her reporting on BBC, CNN, MSNBC or Fox. She’s the co-star of GeekBeat.TV, and her millions of fans will tell you – she’s a little bit country, AND a little Rock n’ Roll! Find her on Twitter @calilewis

Who has 8500 square feet of oxygen rich space, robots roaming the halls, and the biggest Infinity Wall this side of the Rio Grande? The Geek House that’s who!

It’s time for yet another big milestone for the team here at GeekBeat.TV! We started in a small bedroom in Dallas, quickly moved to a leased 2500 square foot office space to OWNING an 8500 square foot epicenter the audience has dubbed the Geek House!

And now, on August 1st, 2014 at 4:00 PM EST, it’s time to show the galaxy why the Geek House is Disney World for Geeks! We literally have people coming from all over the world to be part of the experience, and we’ll be unveiling some very geeky, super secret features of the Geek House!

And guess what? YOU can be part of the experience, without having to come to Dallas! Just join us on our LIVE stream on Ustream.tv at http://geekbeat.tv/live – we’ll have our chatrooms throughout the entire building during the show so be sure to chime in with your thoughts and questions! END_OF_DOCUMENT_TOKEN_TO_BE_REPLACED 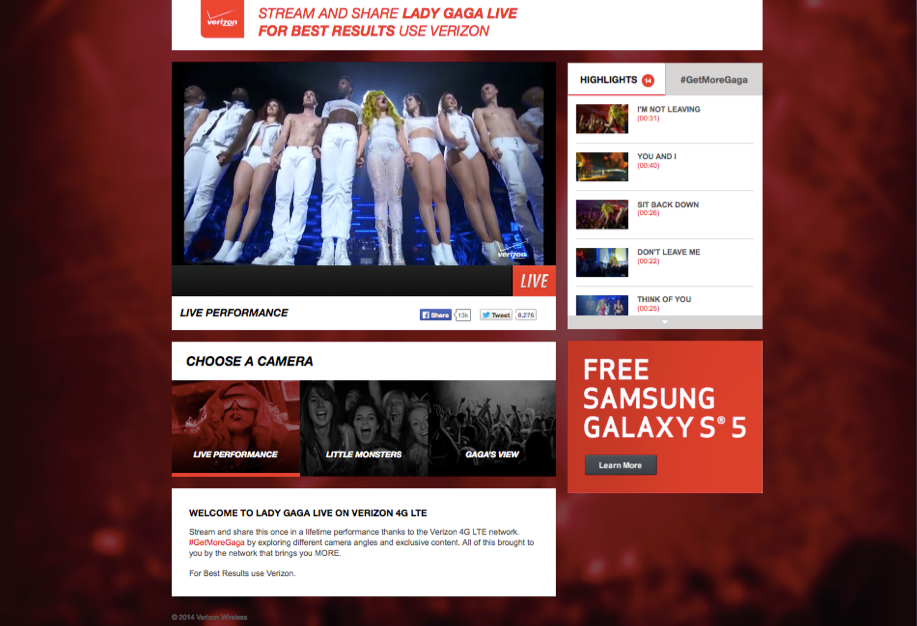 Today’s post comes courtesy of our friends at Go Curvy. Matthew Barrett, Executive Producer of Go Curvy, is our guest blogger for the day. 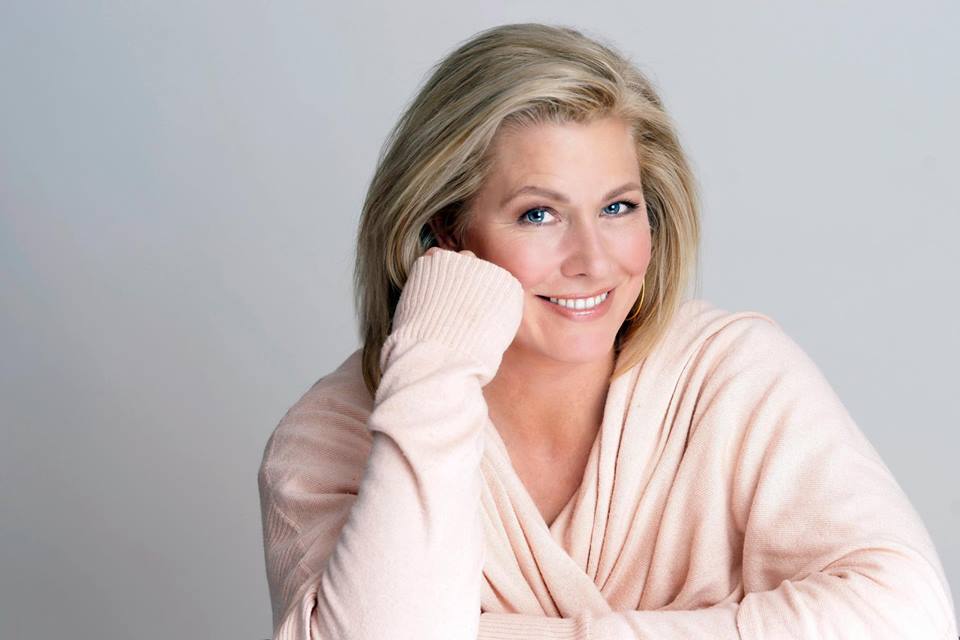 Tomorrow is a very exciting day for Go Curvy and our viewers.

Sherry Lee Meredith, the host and creator of Go Curvy, is interviewing Emme, the first curvy super model, on the show. Go Curvy is all about accepting your curves and loving your body and Emme has been the top ambassador for this movement since the 1990s.

END_OF_DOCUMENT_TOKEN_TO_BE_REPLACED

The NAB Show has officially kicked off, and we’re working with Teradek to bring you all into the show, wherever you are. 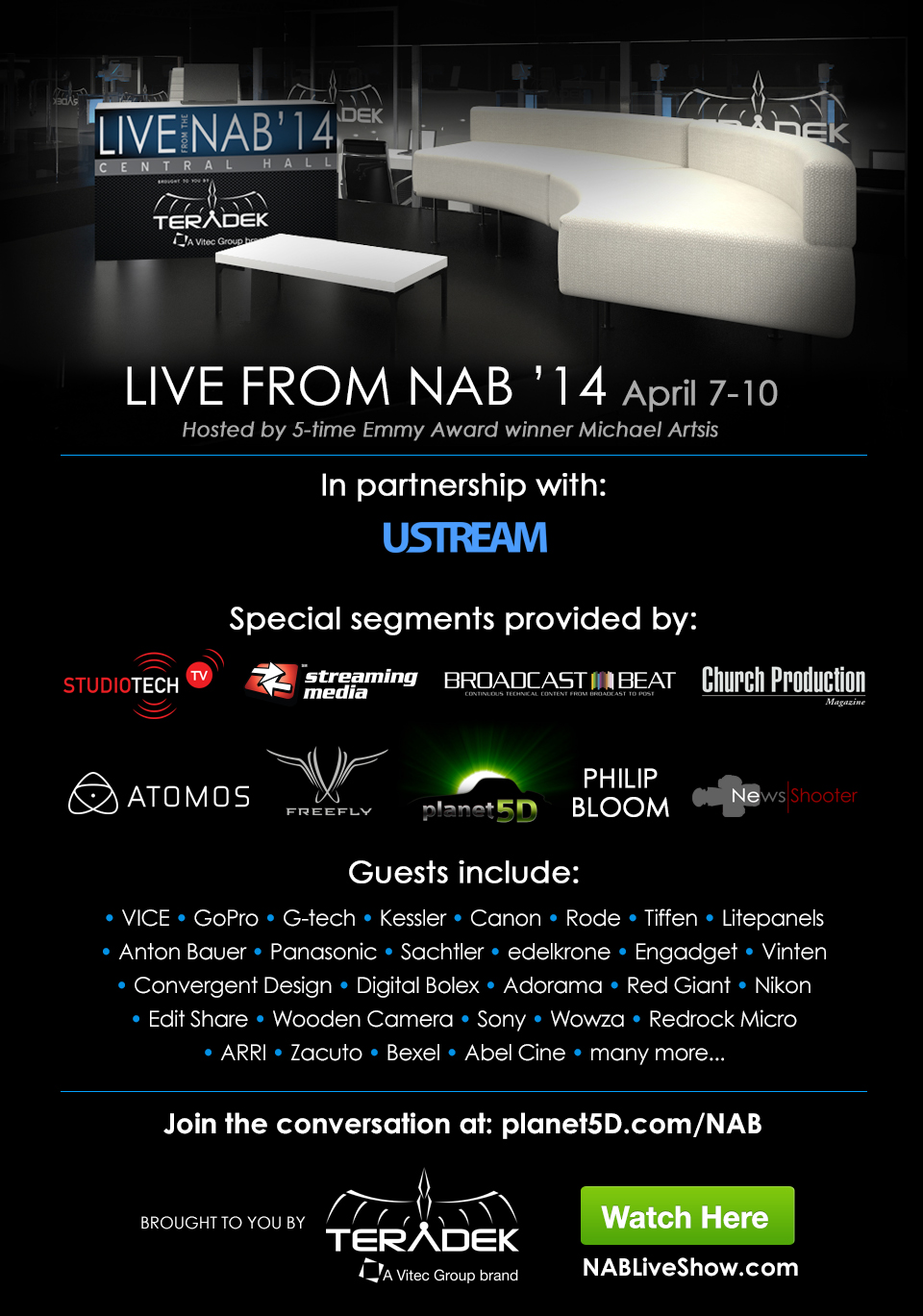 The Hatch of Decorah Eaglet E-3 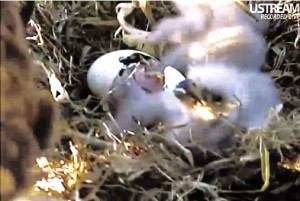 We laughed, we cried, we watched over 200 MILLION times. The Decorah Eagles are easily the biggest celeb on Ustream (sorry Beliebers) and their fanbase is 2nd to none.

Now that our beloved Eaglets have fledged, many fans are taking a walk, er flight down memory lane, reliving all those precious moments we witnessed over the last couple of months. Thanks to the release of never seen footage on the Decorah Channel, and my keen eagle eye senses (pun intended) l am proud to present one of my finest highlights: The hatching of E-3!

Hold the applause please, I have more news! As I continue to review all the wonderful footage Bob has been so gracious to let us watch, I will continue to post every golden moment I find on a weekly basis. Highlights will be added weekly of Decorah moments that made us fall head over heels (er, talons) with the Decorah Eagles every week.

I am proud to present, for the very first time, the actual hatching of Decorah Eaglet E-3 on Ustream

(Tip: If your eyes get a little watery, just blame it on allergy season) 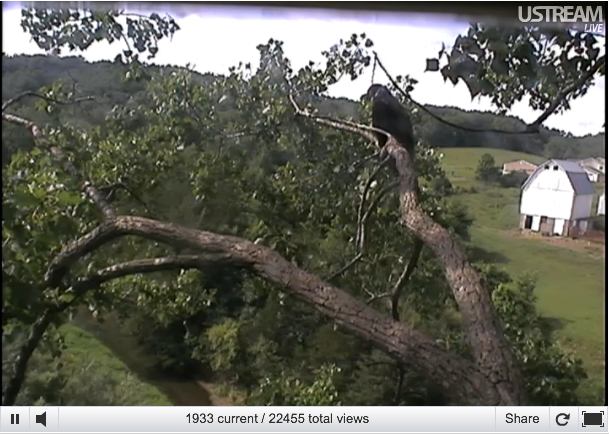 We all knew there would be an adjustment period–a grieving period if you will–following the shut-down of the Decorah Eagle Cam on July 29th. After all, many “eagleholics” devoted the past 6 months of their lives to tracking the developments and progress of the eaglets. However, the outpouring of grief was so profound and so heart-wrenching that Ustream decided to work with the Raptor Resource Project to bring the cam back to life. So we’re happy to announce that as of today, the cam is back on! 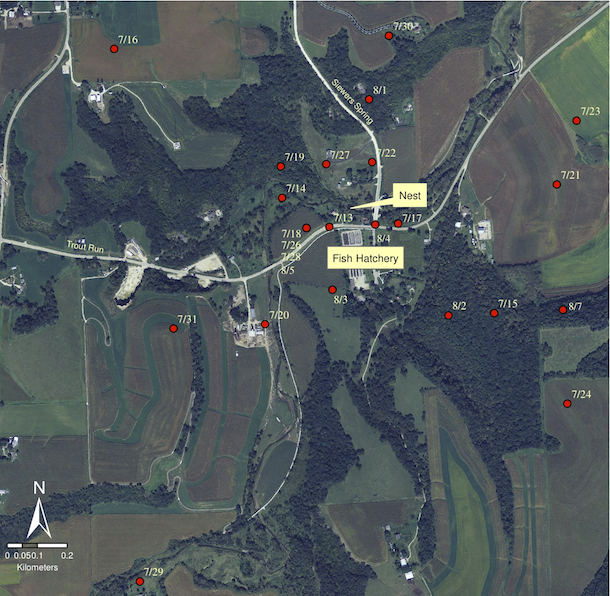 [clear here]
And there is one major notable improvement…you may notice there’s a map in the Channel info section. This map is updated weekly and tracks the path of the eaglets now that they’re fully grown and exploring their world. One of the eagles (dubbed, “D1”) has been equipped with a tracking device that allows RRP Executive Director Bob Anderson to closely monitor the eagle’s whereabouts. The tracking device will also allow eagleholics to obsessively monitor and track where they’ve flown off to!

The eagles have fledged, but there’s still plenty to see from the cam. Stay tuned and you may just see them alighting on the old familiar branch where we all watched them grow and learn to fly…far above the rolling hills and bucolic farmland of Decorah, Iowa.

“When the eagles are silent, the parrots begin to jabber”.

It seems that the “Decorah Eagles” have officially become America’s biggest reality-TV stars. For those who haven’t yet heard, the Decorah Eagles are a family of Bald Eagles nesting in Decorah, Iowa. The Raptor Resource Project, a non-profit organization that specializes in the preservation of falcons, eagles, ospreys, hawks, and owls, established a Ustream channel, consisting of live, round-the-clock footage of a pair of Bald Eagles and their 3 eaglets.

In the last month, the Decorah Eagles have become a full-blown national phenomenon. The stream has been live since February of 2010, but the majority of traffic has arrived since the pair’s eggs began hatching on February 23rd of this year. The Huffington Post wrote a story on the Decorah Eagles in April and, at the time, the channel had attracted 25.6 million views. Today, less than a month later, that number has passed 95 million (currently at nearly 95.9 million). Thus, in 29 days, the stream has tallied over 70 million views, which breaks down to roughly 2.4 million views-per-day over that time.

Ustream told TechCrunch that the Decorah Eagles stream has become the most-watched live stream in the company’s five-year history, passing the 34 million views garnered by Ustream’s Canal 5 news page (which covered the Chilean miner saga in September of last year) over the course of the last month.

According to the live video platform, the average time spent watching the Decorah Eagles in April, per-unique-viewer, was 6 hours and 10 minutes, and over 2,400 human years have been invested in watching the “eagle cam”. Of course, many people are likely leaving the stream on for 24-hours-a-day, so this skews the figures a bit, but the point remains: People love the eagles. And I don’t mean Don Henley’s Eagles.

YouTube’s coverage of the “Royal Wedding” generated 72 Million total live streams, so, considering that Ustream expects the Decorah Eagles to pass 100 million views within the week, the video platform believes that it now has the most-watched live stream (emanating from a single source, or provider). Ever. Though it’s true that the Royal Wedding’s 72 million viewers watched over the course of a much shorter time frame.

Ustream Marketing Manager Tony Riggins tells me that the company has been hearing from people from all walks of life, who have been tuning in to watch the eagles go about their day-to-day bird business. He said that they’ve been receiving calls from hospitals, where cancer patients are routinely checking in with the eagles to get a few minutes of much-needed distraction from their treatments.

The “Real World Decorah” live stream has also become an inimitable educational opportunity, as classrooms of grade-schoolers through colleges are watching the live stream to learn about biology, natural history, and more. With scientists, bird lovers, seniors, kids, and even bloggers all tuning in, this has truly become what Beverly Macy called a “global social learning experience in realtime”.

This is obviously a big moment for Ustream, just as it is for this family of eagles, who are giving the world the best damn reality show it’s ever seen.

So far, my pleas to the Eagle Family for an exclusive interview has not been granted, but stay tuned. This just might be my opportunity for some unprecedented embedded reporting.

And just for good measure, to appropriately commemorate the occasion, here is John Ashcroft singing “Let The Eagles Soar”.

Be sure to tune in for all of our LIVE Inauguration Day Coverage:

The Smithsonian National Museum of the American Indian
Tuesday, January 20: All Day
Watch live coverage of the Capitol grounds and will zoom in on the podium during Obama’s Swearing-In Ceremony.

The Corcoran Art Gallery in Washington DC
Tuesday, January 20: All Day
Watch the celebration hosted by Shira Lazar, in collaboration with Mobilize.org, a non-profit organization dedicated to youth civic engagement.
Art of Change Inaugural Ball – LA
Tuesday, January 20: 7pm PST
Live event coverage from Downtown LA at the beautiful Mayan featuring a full live theatrical performance by The Mutaytor, and special guest performance by The Crystal Method, as well as DJ Motion Potion, DJ Wolfie.
Art of Change Inaugural Ball – DC
Tuesday, January 20: 10pm EST
Live event coverage of the celebration featuring; live music, fire dancing, and some of the hottest artists on the East Coast
RandomTV Inaugural Coverage
Tuesday, January 20: 8am EST
The RandomTV crew will be bringing us all the emotions, the drama, and the hopes of people as they witness the inauguration of America’s first black president.
Quaker Inauguration-Watch Parties
Tuesday, January 20: 8am EST
The Quaker “Start with Substance” campaign will help to encourage American families to answer President-elect Barack Obama’s call to help others in a time of need. 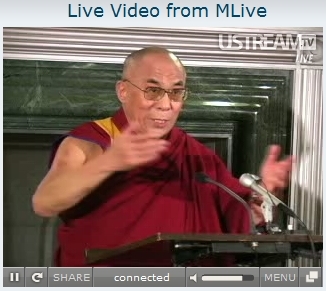 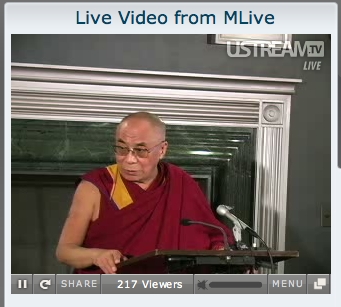 If a picture is worth a thousand words, then how many words is a live broadcast worth?

The Dalai Lama on Ustream. Really, what else is there to say? Except, thank you to Ustreamer MLive for bringing the Ustream community and platform a monumental, truly special first.