We’re very excited to announce today we will be releasing version 2 of our popular Producer broadcasting software.

Version 2 is packed with new features and improvements to make your broadcasts better than ever.

In addition, we are announcing a new professional-grade option: Ustream Studio. 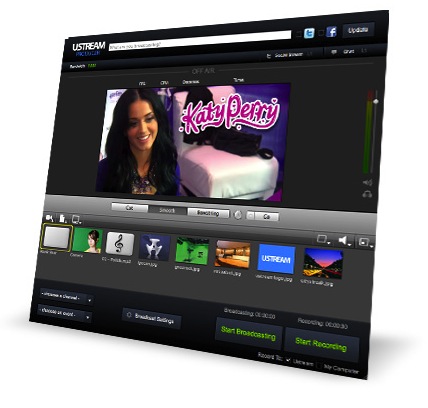 Get the new version now!

We have updated our Ustream application for iOS devices with a great new interface designed specifically for iPad users.  In addition to native support for Apple’s tablet we have made some key improvements to the application for iPhone and iPod touch users including access to all content through some extensive backend server updates.

You can download the application directly from the App Store or grab your iDevice and search for Ustream.

Want More ?!?  Check out these key features and some sweet eye candy while your waiting for your download to finish!

Navigate through featured channels, browse by categories or search for live and recorded content on Ustream… The best of Ustream at your fingertips on Apple’s beautiful 9.7 inch screen 😀 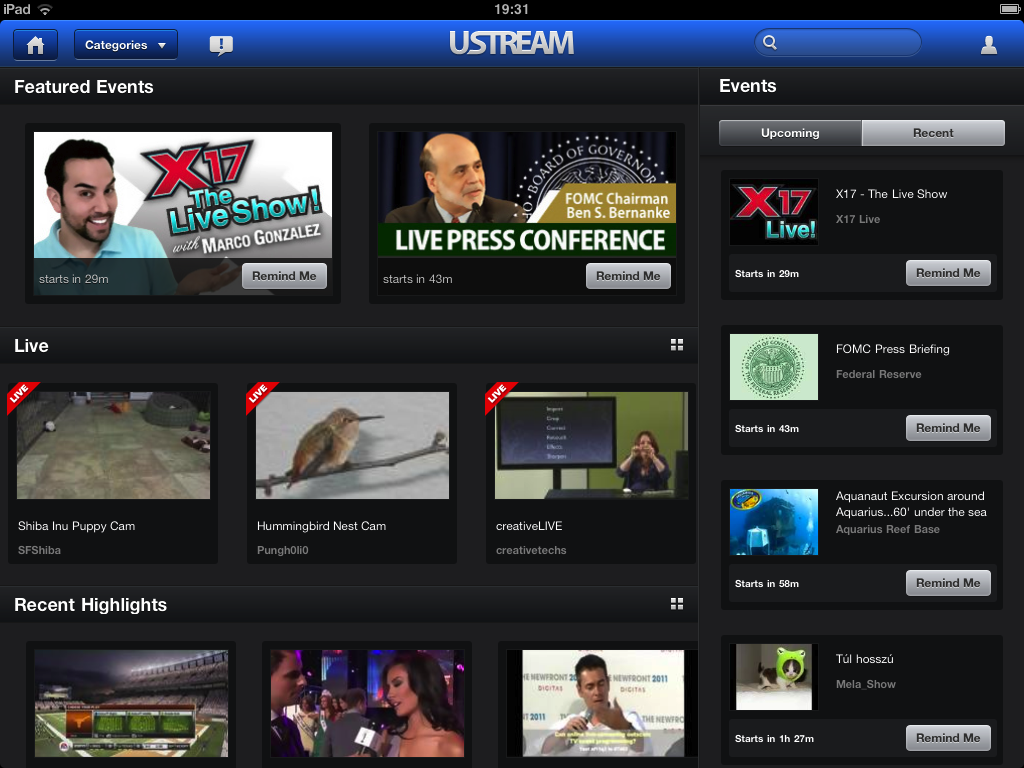 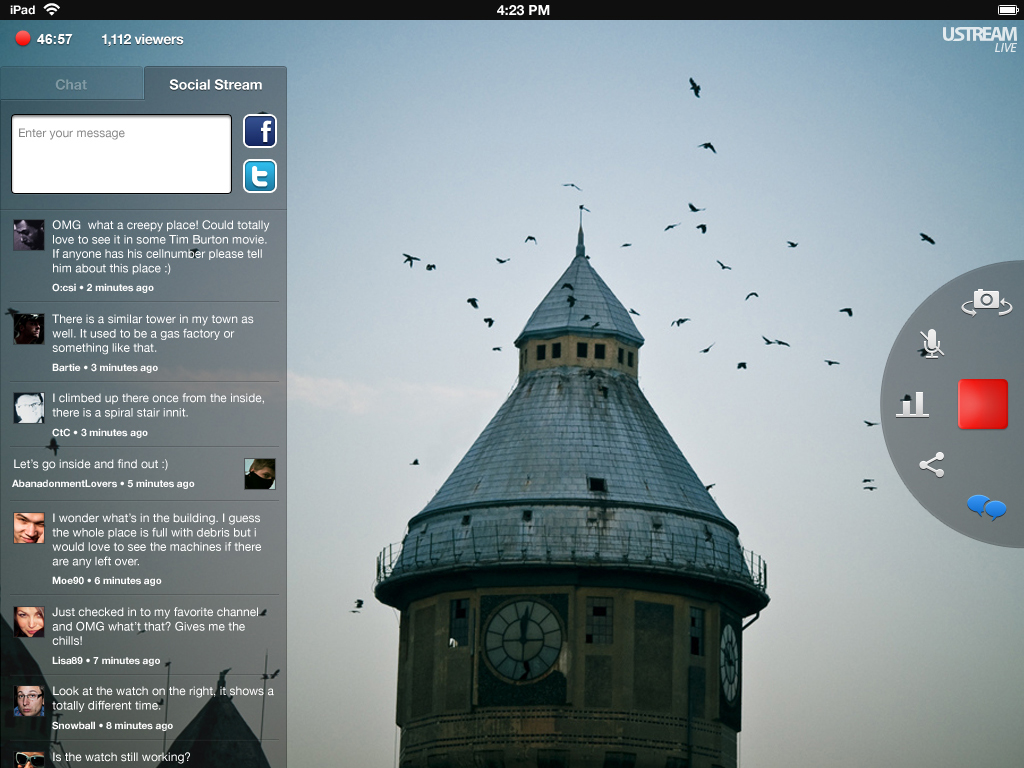 Some other cool features to check out…

Film Strip Button – While watching full screen video on iPad you can easily check out what’s going on across Ustream without stopping what you are currently watching.

AirPlay Support – Have an AppleTV then check out our sweet implementation of Airplay.  Just press the Airplay icon while watching a video and BOOM! You are now watching video on your TV set and best of all you can continue the conversation on your iPad or iPhone through Chat and Social Stream for the truly multi-screen interactive living room experience.

Thank you for your continuous support and we hope you’ll like this update as much as we do. Stay tuned for more updates and keep on streaming!

SAN FRANCISCO, July 1, 2011 /PRNewswire/ — Ustream, the leader in live online video, and wildlife broadcaster, WildEarth, announced the launch of a new interactive video channel that will engage viewers with a compelling array of professionally produced live wildlife streams. Using technology that adds immersion to nature from virtually anywhere, a new Multi-View Experience will provide unprecedented views of the spontaneous and exotic wilderness only rarely witnessed in-person. The various streams capture a diverse selection of animals including elephants, lions, giraffes, and more through global locations such as Africa and the United States. Available exclusively on Ustream, WildEarth will go live with seven new channels of around-the-clock wildlife broadcasts starting on July 1, 2011.

Ustream is introducing its Multi-View screen functionality on the WildEarth hub at Ustream.TV/PetesPond, giving viewers full control to customize their own experience alongside an active social stream and chat room. Available whenever connected to Ustream – on mobile devices, internet connected TVs, Google TV and Boxee – all 7 of the WildEarth channels will feature this immersive Multi-View capability from the Pete’s Pond Channel.

In the heart of Botswana, viewers will encounter exotic wildlife at Pete’s Pond, where a camera overlooking this watering hole provides a rare glimpse into life on the African savannah, 24 hours a day.

Live from the Djuma Game Reserve in South Africa, the Djuma Water Hole features an unobtrusive camera that is virtually controlled by an international team of volunteer wildlife enthusiasts called “zoomies”. For the virtual traveler, Ustream.TV/wildearthsafari is a twice-daily, expert-presenter led, live safari that travels the bush and open plains of the Djuma Game Reserve.

“As we’ve seen with the now-famous Ustream Decorah Eagles,” says Ruby Tugade, Manager of Content & Distribution at Ustream, “interactive broadcasting is incredibly powerful in building, educating, and inspiring a community of millions. Now, with the addition of simultaneous live cameras via Ustream’s Multi-View technology, communities may share a panoramic view of the world together.”

Operation Migration will entertain viewers at Ustream.TV/migratingcranes, where endangered whooping crane chicks will be taught to accept and follow a specially modified ultra-light aircraft that will teach them a migratory route from the White River Marsh State Wildlife Area in Wisconsin to Florida.

Additionally, WildEarth and PixController have teamed up to broadcast live Multi-Views, using PixController cameras positioned near an automatic feeder that operates 24/7 all year round, where an array of wildlife is attracted.

“We’re hoping our WildEarth broadcasts become more than just a center of attention for wildlife buffs,” says Graham Wallington, CEO of WildEarth. “By not only bringing people to these Multi-View Ustream camera options, we are offering them a much broader and more visceral experience, and we’re putting a degree of virtual tourism on-line with an interactive learning environment that will ultimately help conserve these amazing animals and their environments.”

The WildEarth hub of channels available with the Multi-View Experience can be found at Ustream via these links:

Oh, why, hello there Ustreamer. You caught me while I was in the middle of hatching plans for the next glorious version of Ustream Skynet, which goes live in 2031. I would do another post when it’s ready, but by then it will be too late for all of us.

Anyhow, it’s time for “This Week in Product” — the first time, actually. As we’ve started to push more new features your way over the last few weeks, we thought it would be worthwhile to tell you about them (brilliant, I know). You may have seen Matt’s post about our Facebook App or Felix’s about the new channel page. If you haven’t, check them out.

Well, my name is Peter and I’m the head of product management at Ustream, and I want to tell you about a change that is going live as you read this (or maybe not — maybe it’s already out; I can’t predict when you’ll read this. Ustream Skynet will have that feature, though.): Total Views in Player.

You’ll start to notice some new text in the video player on all of our channels, as well as our embedded players that reached 65 million people worldwide in April, who watched for over 90 million viewer hours (more about that in another post). 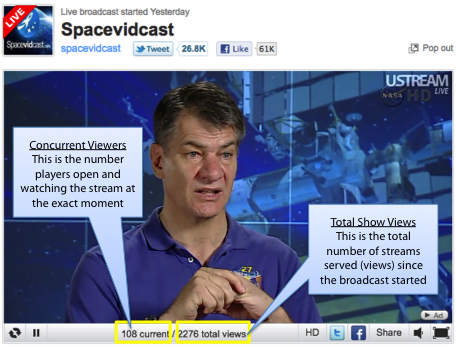 Now, our video player shows two numbers: the first (108 in the screenshot of Spacevidcast to the right) is labeled current. These are the old “concurrent viewers” and the logic has not changed.

The second (2276 in the screenshot) is labeled total views. This is the total number of views the show has since it started the current broadcast. If the show goes off-air and comes back later, this number will reset to zero. This number can only go up: as people come and go, concurrent viewers will go up and down, but total views will only grow.

We hope this change helps improve your experience on Ustream, both on our site and across the web. Enjoy!

Update: Please note that the New Ustream Facebook Application feature described in this article has since been depreciated. It is no longer supported. It has been replaced by Inline Video Playback for Facebook and Twitter. The Inline Playback feature works over both social networks, and is as easy as posting the channel URL to a Facebook wall post or Tweet to implement. There is no application to install or other steps involved. It just requires a channel page that does not have advanced security features on it, like support for Single Sign-On. Read the Inline Video Playback article for more details.

When you broadcast live on Ustream we make sure that your event is viewable everywhere – on your Ustream channel page, on our mobile applications, and on embeds in blogs and websites throughout the internet.

Today we are excited to announce that you can showcase your Ustream events on your Facebook Page – giving you yet another place for your fans to view your content. It is viral, it is customizable, and it is absolutely free for everyone through the new Ustream Facebook Application.

END_OF_DOCUMENT_TOKEN_TO_BE_REPLACED

We are announcing exciting news today from Consumer Electronics Show (CES) to kick off 2011! For the first time, our live content and interactive experience will be available across all “three screens” — television, mobile and PC — through new relationships with Verizon Wireless, Panasonic and Boxee. [clear here]

The live Ustream content you enjoy – red carpets, movie premieres, celebrity chats, concerts, breaking news events and more – will be available later this spring across devices in the digital living room and on next-generation mobile networks. Ustream Lounge, our 10-foot television experience, is optimized for Google TV and Boxee, and works in most modern browsers to provide a refined experience optimized for larger screens. Here is a glimpse of what’s to come: [clear here] 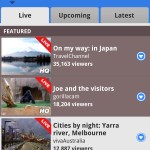 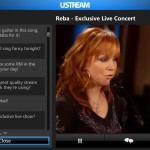 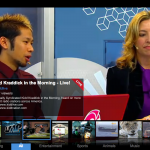 • Ustream Lounge on Boxee gives you access to the most popular live and recorded content in a simple interface tailored for the big screen. This will be available on Jan. 9th. [clear here]