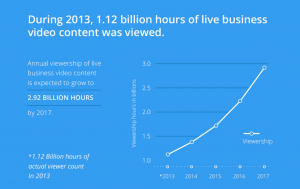 Following Amazon’s acquisition of video platform Twitch for $970 million, many in the business media are taking a rejuvenated interest in streaming video and the companies driving its popularity.

One of those journalists is Jeff Stone of the International Business Times, who recently spoke with Ustream CEO Brad Hunstable. (Read the full article here)

Hunstable emphasized that the success of Ustream is no mystery, that it can be attributed to smart business maneuvering and a commitment to openness, both online and in the real world.

He also asserted that “live streaming is bigger and hotter than ever,” citing as evidence Sony’s recent live-video launch of the Playstation 4, which attracted 4.8 million viewers with an average viewing time of 45 minutes. “That starts to look like a primetime TV audience,” Hunstable noted.

On the issue of copyrights and illegal streaming, Hunstable affirmed that Ustream is committed to protecting the assets of its customers with “actual human monitoring, real-time fingerprinting and also with systems and algorithms,” an effort that began with our Viacom and UFC partnerships.

With all its success over the last seven years, Ustream is remaining true to its roots. Hunstable founded the company in 2007 with the goal of helping troops overseas connect with their families, a cause that is still close to his heart. The company is one of the main champions behind the Oscar Mike Foundation, which assists veterans diagnosed with post-traumatic stress disorder, and is exploring further opportunities for acting as “a force for good.”

Hunstable notes that he has become inspired “to get involved and have a role socially. We donated hundreds of thousands of dollars to citizen journalists on the ground in Ukraine. […] The Internet is a tool for new emerging democracies and societies, [and] it’s important to leverage our technology as a force for good.”