Quantifying Bonnaroo: The Numbers Behind the Stream

Another Bonnaroo Music & Arts Festival is officially in the books, and we saw incredible online engagement across the world for this popular event three-day event in Manchester, Tennessee. This was the first year Ustream teamed up with Superfly Productions to live video stream the event, and the results were pretty remarkable — over 11 million fans tuned in, marking the event as one of the highest-viewed streaming festivals to-date. This was also one of Ustream’s top-viewed events in company history, falling short only to Sony’s PlayStation 4 press conference earlier this year.

Here are some additional tidbits to satisfy the number-cruncher in you: 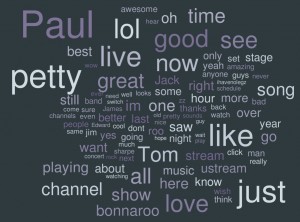 As you can see in the above word cloud, Paul McCartney and Tom Petty stole the show, as the social activity and online viewership were at their peaks during their respective sets. Breaking down the numbers even further:

If you want to check out some highlights or any of the recorded sets, check out our landing page: http://www.ustream.tv/bonnaroo

Now we’re looking ahead to the Outside Lands Music & Arts Festival, which will be in our backyard later this summer. We’ll have more to share as we get closer, but in the meantime, let me know if you have any questions about either festival. You can email me or find me on Twitter.

Joellen Ferrer is the director of communications at Ustream, the leading technology platform for live video streaming. In her current role, she is responsible for building the company’s brand awareness and managing their external reputation through strategic public relations and social media campaigns.