The Revolution Won’t Be Televised: It Will Be Ustreamed from Your Smartphone

As a swarm of police invaded the thousands of Ukranian protestors before his very eyes, citizen broadcaster Aronets realized he had to take action. With no TV station crew or news reporters in sight, the world sat unaware as a nation demanded change from their government, and faced fierce retaliation. Before your imagination takes this story into Rambo mode, or any McGyver tactics to save the day, Aronets utilized a device each of use in our everyday lives (sorry James Bond). By simply using his smart phone and the Ustream Broadcaster App, Aronets placed a bright spotlight on the political unrest currently escalating in the Ukraine. LIVE. Before you scoff at the notion of live news, remove from your mind the traditional image of a rain soaked TV reporter being whisked away by strong storm winds. Thanks to technology, and the power of social media, not only can breaking events spread quickly via word of mouth, we now have the privilege to witness history through the eyes of the common man. In real time. This unprecedented, instantaneous access to the world is a concept assisting citizens of various nations, by giving transparency to their plights for democracy.

There is a saying that, those who control the present can, to some extent, control knowledge of the past. Thanks to the efforts of broadcasters like Aronets, Tim Pool, and many others around the world, we, the global audience now have the unique opportunity to not only witness history as it happens, but write the chapters of future revolutions in live time. The Powers That Be are quickly learning they no longer hold the pens to rewrite history in their favor, as We The People stand up and share with the world our visions of democracy and the conditions in which we currently live.

The revolution will not be televised. It will be shared simultaneously across social networks and watched around the world from the screens of various smart devices.

The real question is, where were you while we were going live? 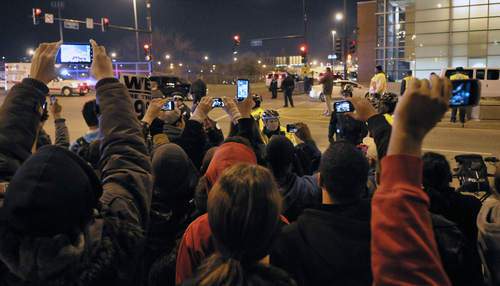 Share your revolution with the world. Do you go live as a citizen broadcaster?  Share your Ustream channel in the comments below.

Stay tuned to this blog post for more breaking news, as citizens around the world share the evolution of their nations, countries before our eyes in real time.