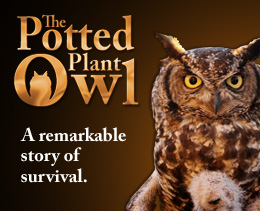 [clear here] How do a pair of Eagle Owls get embroiled in a legal battle and end up nesting in a potted plant?! Well, it’s an interesting story…

Three years ago Allan and Tracy noticed a strange thing: a mating pair of owls had suddenly set up shop in a potted plant on the balcony of their Johannesburg, South African condo. They discovered the owls had been forced to move in response to housing development destroying their natural habitat, a nearby greenbelt and wetland area. Allan and Tracy decided to take up their cause, and the owls became somewhat of a sensation in 2009 due to the housing developer’s ongoing efforts to build on the wetlands. A petition was circulated which ended up garnering over 27,000 signatures to stop the housing developers from continuing with their destruction of the nearby wetlands, and a court ruled in July of this year that the developers would have to cease and desist. But now, the developers are appealing the original court decision, and everything could be lost again.

The owls settled in starting in late August and have since laid 3 eggs, which will hatch after about a 30-day incubation period. Viewers are encouraged to check out the owls and sign the online petition to encourage the courts to uphold the original ruling.

Check out mama sitting on her nest right here.