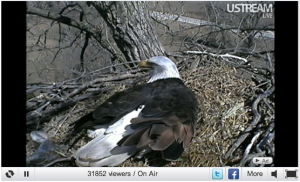 Here at Ustream HQ, our entire staff has obsessively been tuned in to the Decorah Eagle Cam awaiting the arrival of 3 bald eagle chicks scheduled to hatch any time between now and April 1st. The momma eagle has been guarding her nest and giving viewers quite an impressive show in the meantime–with the channel’s two cameras working in tandem to give viewers the best possible angle on the action.

The camera has been up and running since 2007, when the mating pair first chose this secluded spot in the trees to raise their eaglets. Since then, over 2 million people have tuned in to watch the eagle babies hatch, grow, and fledge.

Here are some interesting facts about the nest and its resident Bald Eagles:

You can read more about the Nest on CNN, Wired, and even watch a 2008 PBS Documentary about the eagles here.

And now if you’ll excuse us, we have some eggs to watch…