On Sunday, February 1, millions of viewers will tune in to enjoy the Super Bowl and the surrounding interviews, reports, highlights and analysis. As you know, more and more of that video content is going online.

For example, NBCUniversal has announced that it will offer “Super Stream Sunday,” live-streaming 11 continuous hours of content related to the Super Bowl. And, many fans of the Seattle Seahawks are already familiar with the team’s popular Ustream channel, which boasts more than 3,000 subscribers and over 1.2 million views. What they may not know is that the Seahawks organization also uses Ustream for internal communications and live-streaming press conferences.

Another client unrelated to football for most of the season, uses their Ustream channel to broadcast football practice sessions for their ‘athletes.’ Yes, for those who prefer their running backs with four legs, Animal Planet will be live-streaming pre-game practice for the Puppy Bowl at http://www.apl.tv/puppy-bowl.htm starting Friday. In this annual favorite, puppies of all breeds take to a miniature field to “play in a winning combination of terrier tackles, touchdowns, puppy penalties, fumbles and Fido first downs.”

What will you be streaming on Super Bowl Sunday?

Researchers from Deloitte recently asked more than 2,500 business and HR leaders to rate the urgency of numerous business issues, ranging from workforce capability to diversity and inclusion. No less than 79 percent of respondents rated the issue of employee retention and engagement as “urgent” or “important.”

And how are they doing on that front? Not so great, according to a separate survey by Gallup:

An alarming 70% of American workers are not showing up to work committed to delivering their best performance, and this has serious implications for the bottom line of individual companies and the U.S. economy as a whole.

Live streaming video offers employees real-time engagement with top leadership, whether those leaders are delivering prepared presentations or answering questions off the cuff at a virtual town hall. It builds a personal bridge that can fuel a whole new attitude toward the organization and the employee’s role within it.

Take a look at what Ustream client Zuora did when its employee base grew to span across nine time zones. By taking the company’s weekly meetings online via live video, Founder & CEO Tien Tzuo was able to bring Zuora’s workforce “under one virtual roof,” where employees could interact and ask questions in real time. “Ustream has been a big part of helping us keep that small company feel,” says Tzuo. “[It] allows us to create a really rich, interactive experience.”

How can live streaming video help you create a more engaged workforce? Learn more from by registering for our webinar “Business Use Cases for Live Video Streaming” here.

According to a recent Wainhouse survey, internal applications such as employee training and executive presentations continue to be the most popular uses of live streaming video. However, outward-facing applications such as customer service, corporate advertising and branding, and IT support are all gaining traction. 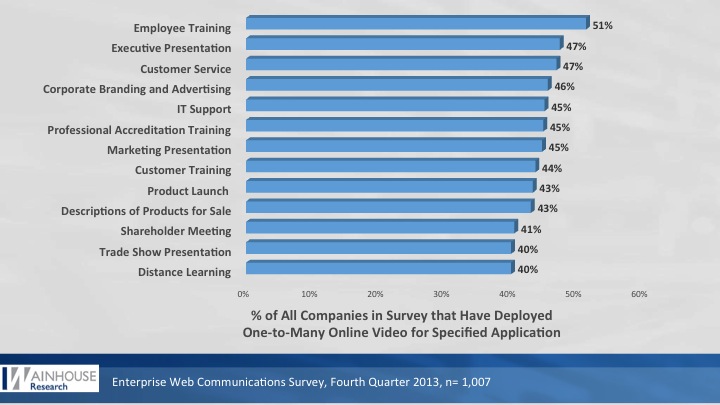 One of the case studies to be covered will be that of CreativeLive, an online training destination that launched in 2010. Driven by a model that blends free live video with paid access to on-demand content libraries, CreativeLive draws as many as 20,000 registrants to its live presentations … and seven times that number to its on-demand recordings.

Other case studies to be presented will feature

The webinar will begin on Thursday, January 22nd at 10 am PST; to register, visit https://video.ibm.com/lp/business-use-cases-for-live-video-streaming#itm_source=blog&itm_medium=onsite &itm_content=live_video_use_cases&itm_campaign=wainhouse4_odw

And you know what they say: “What happens at CES … gets broadcast all over the world.”

Indeed, many of the tech world’s power players — including Sony, NVidia, and Samsung— took to their Ustream live video streaming channels to unveil their latest innovations to a global audience. Media organizations such as Engadget, TechLaunchPad and GeekBeatTV also live-streamed their onsite coverage of the show. These live webcasts allowed presenters to offer a real-time virtual seat at CES to individuals around the world.

In addition to offering presenting companies a chance to show their stuff, streaming video also took center stage in many of the event’s major announcements.

Roku took the opportunity to announce the addition of 4K streaming support to a new TV reference design, which consumers will start seeing its new UHD models later this year. (Read more)

At CES 2015, Cisco announced a deal with broadband provider Charter Communications, under which Cisco will supply the technology for Charter’s upcoming next-generation video platform. Resources included in the deal will derive from Cisco’s cloud-based security suite, including a downloadable security solution for set-top boxes as well as seamless digital rights management (DRM) for video services on a range of IP devices. (Read more)

Many industry thought leaders are dubbing 2015 “The Year of Video,” and if the activity around CES is any indication, they’re absolutely right. Stay tuned!

Ustream CEO Brad Hunstable has been invited to join the Real-Time Academy of Short Form Arts & Sciences, a consortium of leaders in technology, journalism, business, and culture that plays a vital role in choosing the winners of the Shorty Awards, honoring the best content producers in social media. 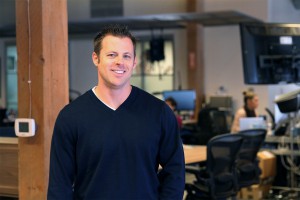 Now in their seventh year, the Shorty Awards “honor the best of social media, recognizing the people and organizations producing real-time short form content across Twitter, Facebook, Tumblr, YouTube, Instagram, Vine, and the rest of the social Web.” Every year, millions of people take to Twitter to submit their favorite content creators from entertainment, news and media, technology and innovation, arts and design, and global issues as Shorty Award nominees.

The Academy will choose the winners of the 7th Annual Shorty Awards when finalists are determined at the end of February. Each Academy member is assigned about 10 categories based on his or her area of expertise, with about seven finalists per category. The judging process will take place from February 27 to March 9, and winners will be announced in April at a live-streamed ceremony in New York City.

General nominations for the 7th Annual Shorty Awards will open early this year; for information about nominating brands, agencies, and organizations visit the Shorty Awards website.