Ustream CEO to CNBC: “We need clear protocols” for cyberattacks 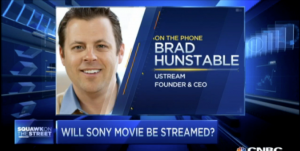 When a cyberattack on Sony Pictures resulted in cancellation of the studio’s next movie release, The Interview, the topic of cyberterrorism thrust its way onto front pages around the world

To discuss the issue, CNBC reached out to Ustream Founder and CEO Brad Hunstable, who had experienced a similar denial-of-service (DOS) attack in 2012. (Watch the interview here.)

In the interview, Hunstable recalled a 2012 DOS attack on Ustream by Russian sympathizers, who targeted citizen journalists broadcasting anti-Putin protests.

“The attacks were an attempt to limit transparency and, really, free speech,” Hunstable said. “It was highly organized; it was highly adaptive.” Ustream reported the attacks to Federal authorities; however, “there really wasn’t a clear way that they [could] help.”

Hunstable cites the recent Sony Pictures crisis as further evidence of the need for “clear protocols and cross-communication between the public and private sectors on how to handle this.”

Watch the CNBC interview for more of Brad Hunstable’s comments on cyberterrorism.