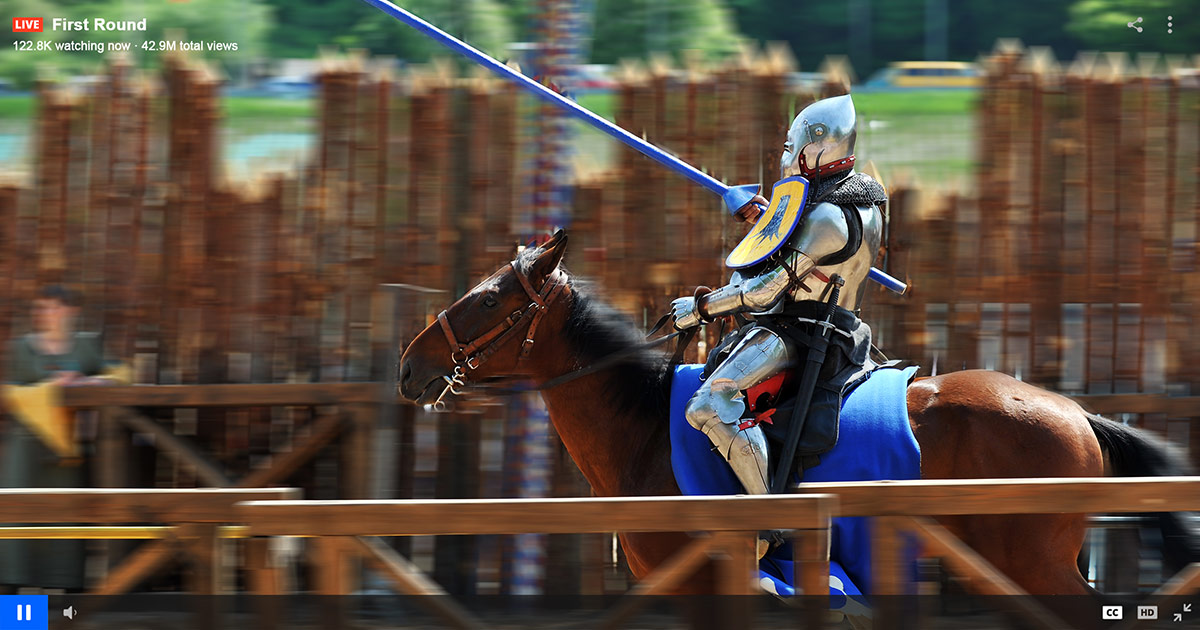 “If you haven’t seen jousting before, picture your worst nightmare come true,” says Luke Campbell, chief operating officer at Epicentre.tv, which is streaming the first World Jousting Championship this weekend on IBM’s live streaming platform. “It’s two guys running on horseback, down a tilt line, 60 kilometers an hour (about 40 miles an hour) using wooden lances with metal tips to knock each other off. It’s insane, actually. You have to witness it to believe it.”

Eight of the world’s best knights will do battle, and in the end, one will emerge with the Sword of Valour. “We hosted our first jousting event last year, and received 46 million views in the media, which is fantastic,” Campbell says.

Jousting is the latest offering from Epicentre.tv, which hosts traditional and extreme sports, as well as music and entertainment events. Epicentre has been using IBM’s video streaming solutions for five years because streaming video enables them to bring unique content to new audiences. “It’s quite amazing how far we’ve grown this company from our Sydney office to reach audiences in every corner of the globe. And the [IBM] delivery network has allowed us to tap into these audiences, giving them access to content they couldn’t otherwise see, and without buffering, skipping, or issues like that.”

Fans turn to Epicentre for BMX biking, field hockey, tennis, UFC fighting, motorsports, body boarding, ice hockey, music concerts, and more.  “We’ve gone from broadcasting in just a few countries to reaching fans in 60 or 70 countries around the world,” Campbell says.  “I love the fact that over the years, our fans have been able to watch 15 and 16-year old junior athletes mature into national, world, and now Olympic champions.”

Jousting may not be part of the Olympics yet, but it might be taking a major step towards that goal this weekend.  Catch the action on Epicentre.tv here: bit.ly/2fdKONG.  And try your own free live-streaming trial of IBM Video Streaming.