How to Live Stream in Multiple Languages 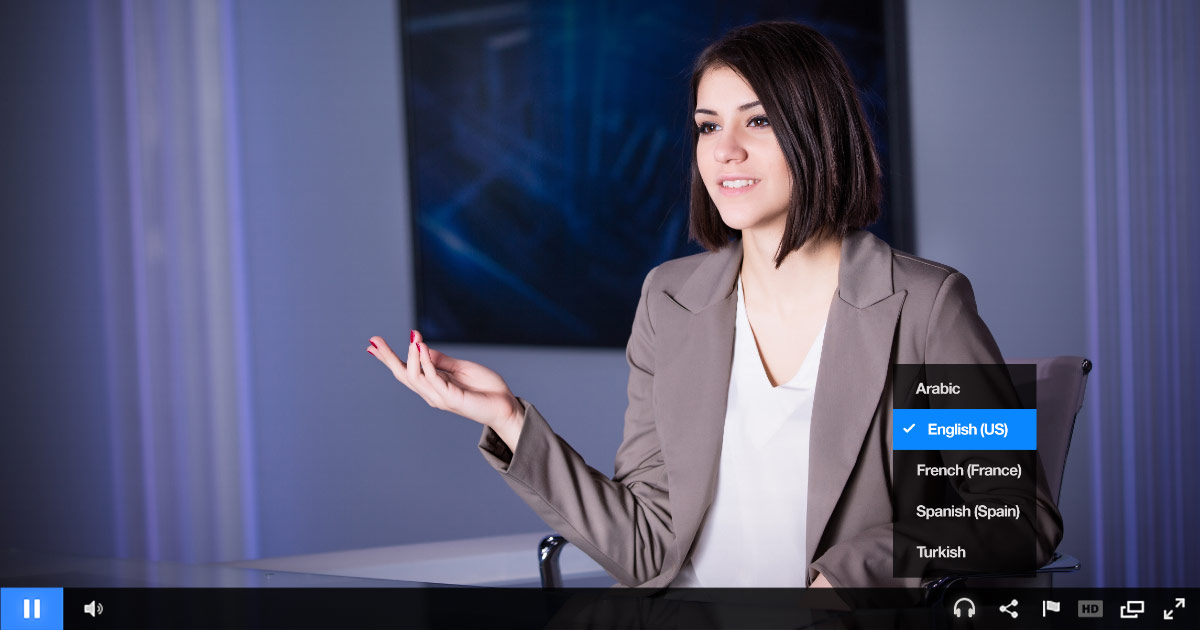 Interested in learning how to live stream in multiple languages? Offering multi-lingual content as part of your video strategy can be a great way to broaden attendance and improve asset comprehension. It can also allow more people to share in the excitement of live video, enjoying in-the-moment experiences while being able to appreciate the details.

IBM Watson Media has added the ability to broadcast live content in multiple languages. This allows broadcasters to publish a video stream and then include multiple audio streams as part of the same live broadcast. Consequently, being able to effectively produce content for more people in more places. This also fits into one of the video trends of 2018, which saw a notable increase in the global viewership of content.

Chinese, Spanish and English are the most spoken languages globally by population. If doing external content and choosing only one of these, a large amount of potential viewers will be excluded. If you’re in the process of selling content over the Internet, it’s also worth noting that 75% of the population prefers to buy from sources that are in their native language. Having content to help bridge this gap can therefore be beneficial. However, even when not selling content, creating assets that are multi-lingual can be beneficial for the reason of inclusion and generally making a wider audience feel supported.

To that point, having content in multiple languages can sometimes directly support the goal of that content as well. For example, if it’s intended to improve communication within a company, making that asset more accessible can go a long way toward achieving that. In addition, it doesn’t just make content more accessible, but also can cast the company creating it in a good light, that the effort was spent to make the messaging more inclusive.

If you have decided to provide multiple languages with your video content, there are a few best practices to follow to make this a better experience for viewers. One best practice is to offer these multiple languages from within the same video and video player. This means that the same asset could be switched from English to French to Spanish, etc. The reason for this is that someone who is interested in the stream can then share it with others. Some of these individuals might speak the same language, but they may be more comfortable watching content in another language. By having the various languages in the same player, viewers can switch to their preferred language regardless of who sent them the content.

Another good practice is to tie the changing of language to an icon rather than descriptive text. This way people can know it’s there, regardless of their language of choice.

The fact that multiple languages are being provided should be spelled out. A great way to do this is to note it below where the content is being presented. Ideally this should be written in the respective languages that are offered as well. For example, something like this could be included below the video:

Available in English, Spanish and Japanese.

Notice that we have also included an icon, which in this case is the same one that would be used to change languages in the player. This will clue in the user on how to change the language. If you don’t have control over the ability to include images, simply stating it in their respective languages will still go a long way toward conveying this. 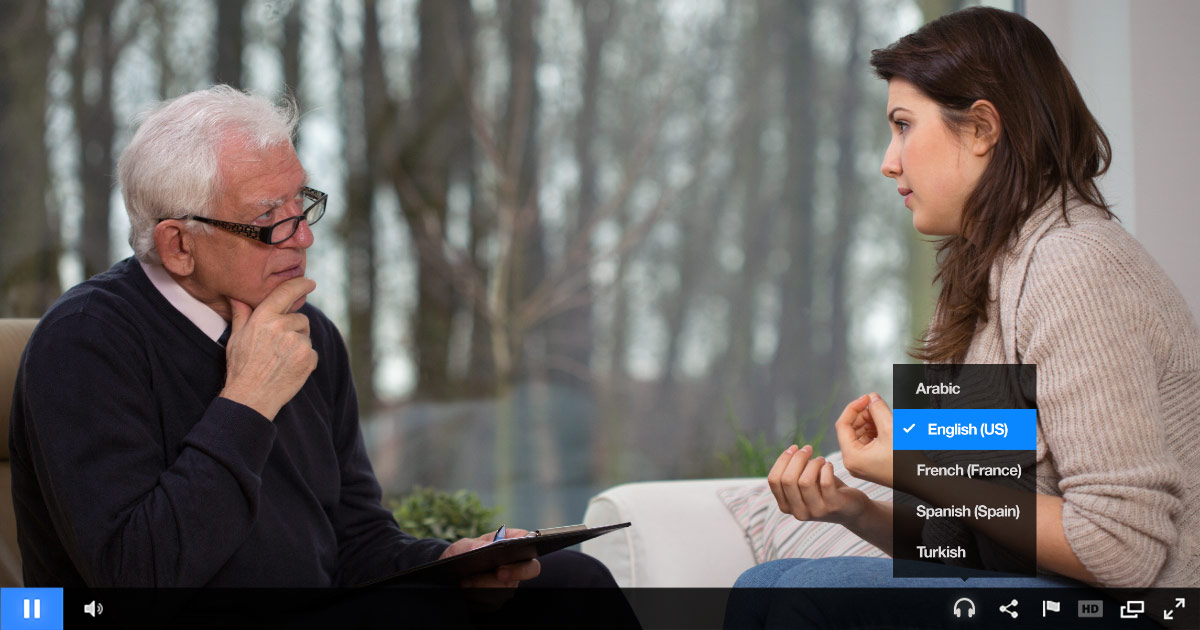 In order to live stream a multi-language session, this requires doing a video only broadcast from your encoder. In the case of IBM Watson Media, this means using the RTMP URL and Channel Key found under Encoder Settings on an account. From the same or a different encoder, a number of audio only broadcasts would then need to be created, one for each desired language track.

Naturally, there needs to be a way for the system to relate which language track is which language. To achieve this, a language suffix has to be added to the end of each isolated audio track. An example of this, using US English, would be:

While if you wanted to also do a track for Spanish, it would be:

This language tag is appended to the end of the channel key. So an example would be:

Check here for our help article on this feature, which has a complete list of the supported language suffixes.

Once the broadcast has started, the addition of these multiple languages can be confirmed in two different ways for IBM Cloud Video. One is by pulling up the video player where the stream is being sent to. If multiple languages are selectable, from the headphone-like icon, then the additional languages are coming through. Another method to check is to utilize the Live Monitoring Console. Under stream setup in this view will be a list of the sources being sent, which can include the video track and the different language audio tracks as well. 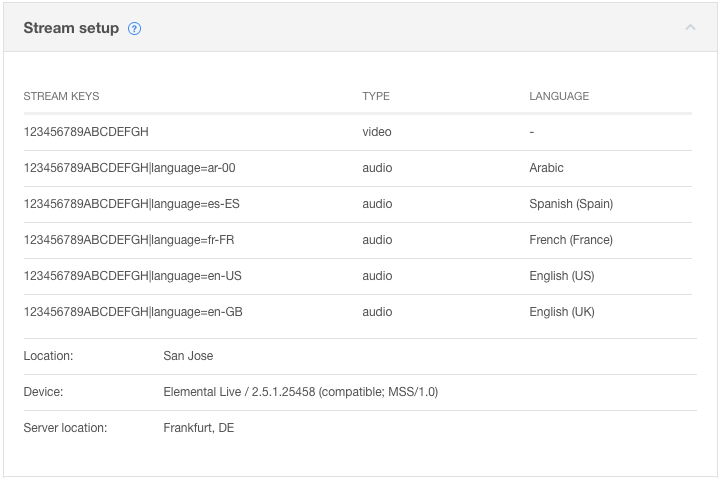 The addition of multiple languages also means that content owners can select a default audio language for their content from those available. Once selected, this will tell the player that when a viewer first arrives to set this language as the default. They would then have to manually select a different language if they wanted to watch the stream in another language.

Once multiple languages are available to users, this becomes something that can be toggled inside the player. To do this, a headphone-like icon appears as part of the player controls. Once selected, a list of available languages for that content will expand. The user can pick from these and the video will then change to the selected language. 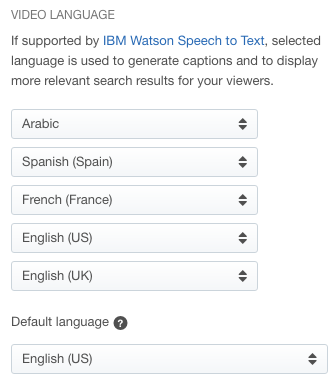 IBM offers automatic closed captioning through utilizing IBM Watson. On a normal on-demand video, this process entails selecting the sole language for that video. After this, Watson will utilize speech to text capabilities to generate a transcript. This process takes roughly the length of the asset to generate.

This can be done for the default video language for the asset, as long as it’s one of the supported types. Captions in additional languages, to provide parity with the language tracks, can also be done, although requires uploading a VTT file in this language rather than using the automatic captioning. Check this WebVTT Captioning and Subtitle article for more details on uploading and creating VTT files.

Offering multiple languages for live content, and the on-demand archive for it, is a great way to potentially broaden an audience. It creates an experience that is more inclusive and enjoyable. For internal content, that can mean making assets more understandable. For external content, that can also increase enjoyment, prompting viewers to be more inclined to share it with others, ultimately bolstering the overall audience for your message.

Interested in other strategies to bolster your live audience? Also be sure to check out this archived Reach and Retain Your Live Video Audience webinar.