What Are Video Chapter Markers

Video chaptering allows content owners to add navigation markers to a video. This can break up longer, previously recorded content by providing places for viewers a way to more easily resume content or launching points for viewers to leap into specific moments of interest.

When chapters are added to content, they appear in the info area as seen in the image at the top of the article. These chapters, which require using the IBM Watson Media channel pages, can be clicked on to instantly jump to that point in the video. They are represented by a time stamp (noting minutes and seconds) and a name designated by the account owner. 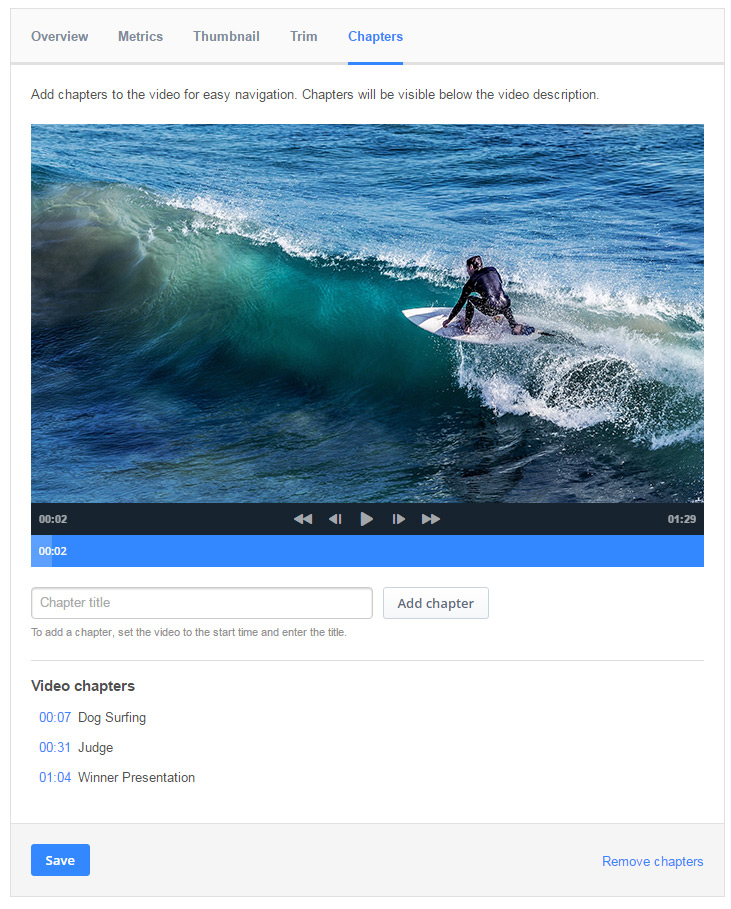 After logging into a Ustream account, chapters can be associated with a video on-demand (VOD) by clicking on that asset. A new subsection has been added for on-demand content called “Chapters”, which controls this feature. This allows content owners to both add chapters and verify what chapters have already been added to that video as well.

To add chapters to a video, the content owner only has to watch the video, pause at the appropriate moment and then give the new chapter a title before clicking “Add chapter”. Admins can also click to different parts in the timeline, rather than having to sit through and watch the video in its entirety.

After being added, the chapter names will appear below in a full list of chapters for that asset. Chapters can be edited or removed by hovering over them in the list below.

The edit option will zip to that moment in the video above and gives the user an opportunity to change the name for that chapter.

When satisfied with the chapters, click “Save”. This is a non-permanent action. As a result, account administrators can return to this page later to change the chapters or remove them. Furthermore, an “undo changes” option will also appear to revert to the previous saved version of the chapters if needed.

This improved feature also bring with it functionality to easily share these chapter breaks. This is done through the creation of URLs for these chapters with “?t=XX” added to the end of the address. The XXs are tied to the unit of time in seconds position in the video content.

So a sample URL with the chapter marker added to it would appear like this:

The XXXX part is the unique ID for that video asset, while the second marker is noting that this would drop the viewer 40 seconds into the video. Because the marker is directly tied to the second position in the timeline, this also means that viewers can create their own custom “start at” moment. This is done through editing the numbers at the end to create a new starting point. For example, if you want the content to start at 30 seconds into the clip, the end could be changed to “?t=30”. Another example would be wanting to change to 1:12 seconds into the clip, which would end at “?t=72” as we are converting the minute to 60 seconds.

The IBM’s video streaming platform supports being able to edit assets in a non-destructive way. This includes being able to remove unwanted portions of a video at the start or beginning of the content. For example, on a live stream, maybe something was said about a product that has yet to be released. This could be considered sensitive information and possibly there would be a desire to remove it until the product was released. The cloud based editing included with the service would make this very easy to do.

Under the old chaptering method, performing cloud trimming would negatively impact the chapters. For example, if one minute of footage was edited out, all chapters would be off by a minute. The new chaptering method, though, corrects this by tying chapters to the moment in the video. They aren’t strictly associated with just the time codes. So if chapters were set at 3:45 and 14:10 in the video, and then a minute of footage was trimmed from the start, the chapters would still be at the correct locations in the video. The chapters would just now lead to 2:45 and 13:10 to correspond with the edit. Cloud trimming is non-destructive, though, meaning a content owner can revert the changes. If a video with chapters was reverted, though, the chapters would adjust accordingly. An example scenario would be if the product was released and the removed part was no longer sensitive.

In many ways, any long form content could benefit from using video chapters. Because Ustream utilizes auto archiving on live streams, where previously live broadcasts are hosted in the cloud for later viewing, chances are a lot of Ustream users will have long form content already on their account. That said, certain video assets lend themselves better to this feature than others, and so these use cases can give some guidance. These use cases are largely external facing, suited to the IBM video streaming offering, but some can be internal stories as well such as training which would be an IBM enterprise video streaming story.

Looking to promote your services through a contest or charitable event? Want to show individuals using your product out in the wild? Live streaming events can be a great way to reach an audience while hoping the content will go viral from spillover interest. Events are typically structured, maybe with an interview at one point or a series of competitions. Because events can be quite long, chapters give a perfect opportunity to break the content up and also present the points that might be of most relevance to viewers.

Educational video content can range from short form to long form, dependent on the need. Even short form training can be well suited for video chapters, though, as the content lends itself to repeat viewing. As a result, these markers aid in finding relevant moments faster. For example, if a training video was created around a new product these chapters could separate the individual features. This would help if someone has a future question on just one element of the new product. Thanks to the chapters, they could quickly jump to that moment rather than have to watch the whole video.

Long form by nature, webinars are a great way to start to fill a lead funnel. Webinars are created around a concept that prospects and competitor customers would find interesting. These online seminars can then range from 30 minutes of content to an hour. There is always a structure to a webinar. The minimum shape this takes is the main part of the presentation and then a Q&A part. Exact chapters might differ, but a sample structure could be:

The strategy behind adding in an agenda marker is that this works as a nice starting point. It gives an easy way to jump to past speaker introductions and then watch the meat of the presentation again.

Documenting a company’s presence at a trade show is a great way to maximize ROI. Chances are personnel is already keyed up to attend. A method to stretch that dollar further is through broadcasting this coverage online. That footage can then be archived for later use.

Coverage can range from talks, to panels, to showing booth footage as well. Each of these presents an oppurtinity to break this content down even further. For example, panels might be sorted into topics that will be covered, which can work as chapter moments. Speaking sessions also might include multiple participants speaking on their own topic, which can also provide a way to segment by chapters.

Have content which features “acts”? Creating shortcuts to let viewers jump to individual artists can offer viewers a quick way to access what is most relevant to them. This can also aid repeat viewers if they enjoyed particular moments more than others and allow them to focus on those for repeat viewings.

A video chapter offers viewers more choices in their viewing. It also provides an optimal way to present long form content, yet still cater to audiences who might otherwise be intimidated by a long runtime. URL sharing also empowers end viewers to be able to share specific moments. This makes it easier to talk to a certain part of a video and then share that with others. Doing this avoids viewer confusion by not having them watch the whole video or ask that they manually skip to a certain part of the video content.

Want to try out the improved video chapters for yourself?  Request a demo of Pro Broadcasting or Align to unlock an end-to-end solution for delivering engaging video with rich access options for end viewers.