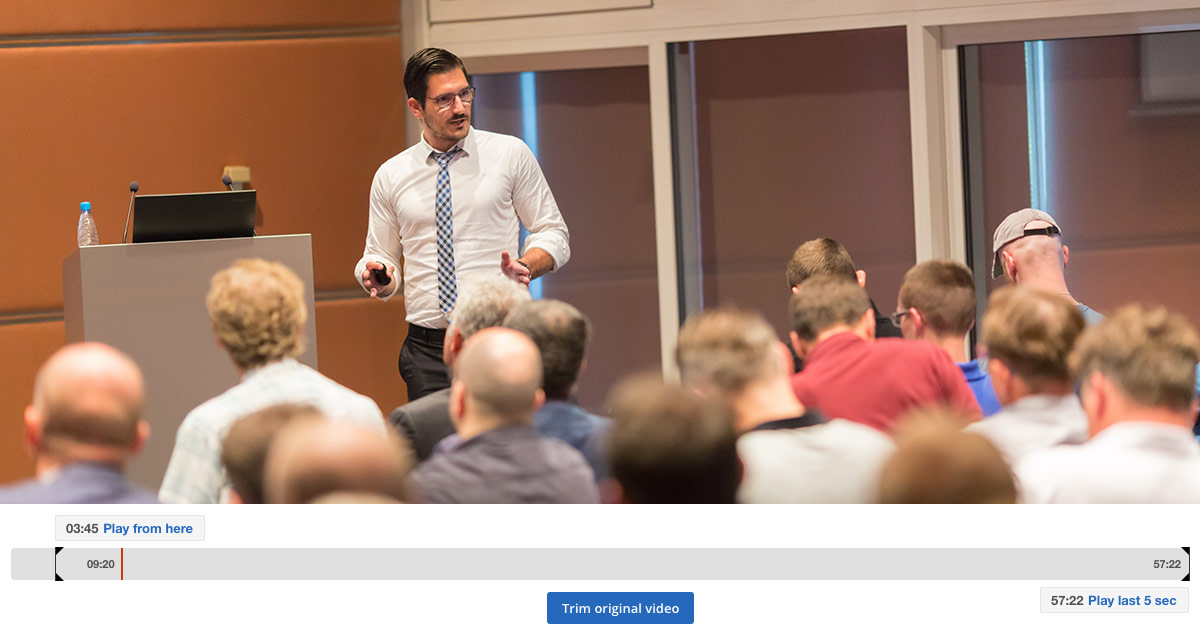 Looking for cloud video editing capabilities? Tools that can let you trim content online while also looking into value adds like the ability to chapter content for better accessibility?

IBM Watson Media offers capabilities for content owners to modify videos, either uploaded or archived from previous live sessions, online. This is non-destructive, meaning changes can be reverted, and is collaborative as multiple managers and admins can utilize the same account to edit video content.

This article covers this feature set along with highlighting improvements that have been made, moving the technology to being HTML5 based. Also be sure to register for our Getting Started with Enterprise Video Management webinar as well, which will cover this and any additional improvements and features to the IBM Watson Media services.

Available through the dashboard, IBM offers video streaming and enterprise video streaming users an online way to trim their video assets. This entails being able to remove unwanted portions at the start or end of a video asset. These assets can be ones that are uploaded directly or can be auto archives of previous live streams. Furthermore, this editing is non-destructive, meaning the changes can be reversed at any time. For example, you can remove five minutes from the end of a video and then later revert those changes.

Alternatively, you can also grab a portion of a video, like a 10 minute segment of an hour long asset, and create a new video from it. This process can’t be reverted, meaning the new video you create can’t be restored to the full length of the original. Consequently, it’s recommended to keep the original on the account. For example, if a 30 minute long video features three segments you can create a new video of two of the segments and then just non-destructively trim the original. This would give you access to the three videos separate from one another, but keep a version you could fully restore later if needed. 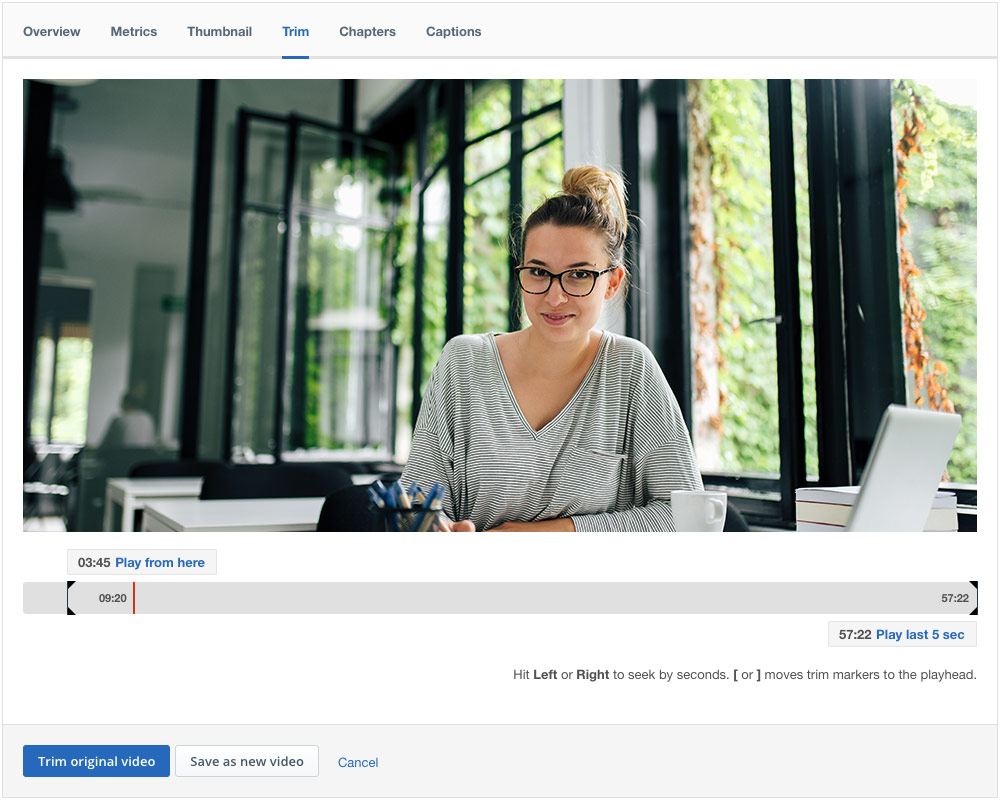 The ability to quickly trim a video can be invaluable, saving time and speeding up the release of assets. Below are a few use cases that benefit from this feature: 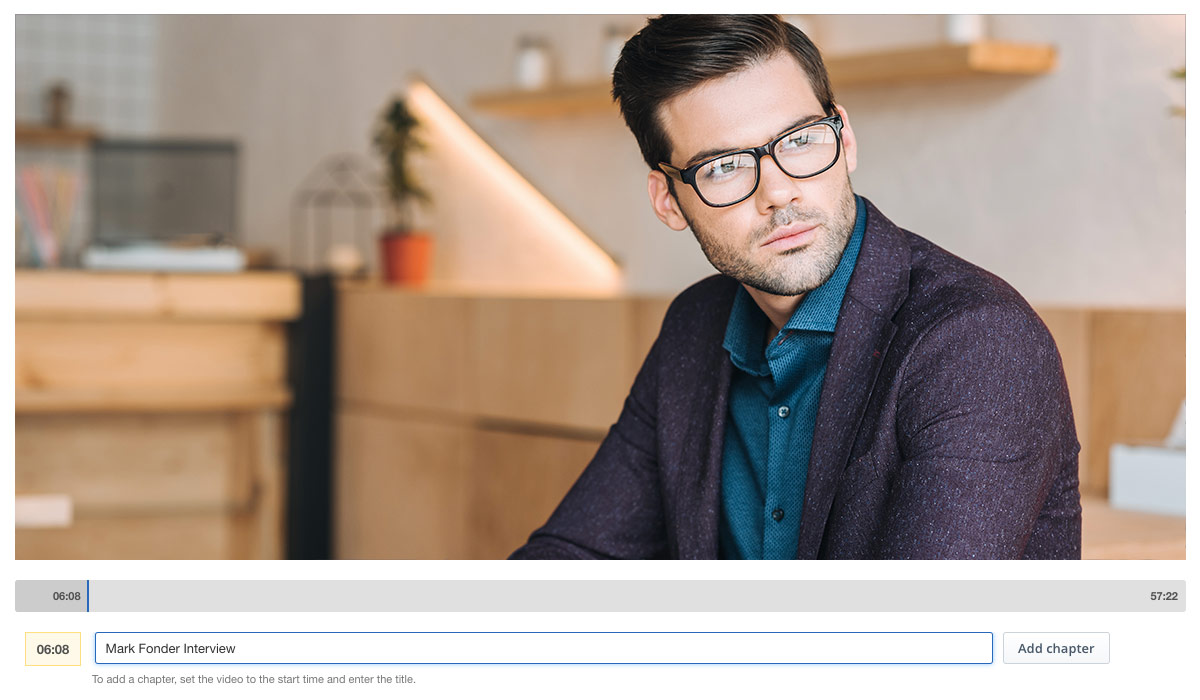 From a similar interface to the editing tool, users can also place chapter markers inside their assets. This creates a navigation menu in the info area of the video player with active links. For example it might list:

Each of these would be clickable and would allow the viewer to jump to that moment in the video.  This feature is controlled through the dashboard and the number of chapters, timing and name of them is controlled by the content owner.

HTML5 based and other improvements

IBM has enhanced its cloud video editing and chaptering features. This technology, still found online in the dashboard, is now no longer Flash based but done through HTML5 instead. This switch brings with it several benefits for end users, first and foremost being it doesn’t require the user to be running a device or browser that is setup and enabled for Flash. This is something that used to be more trivial when Flash was included with browsers like Google Chrome. However, it has become more of a talking point after it was removed from the browser and others, now carrying with it some warning prompts before being enabled on a site. A lot of this was spurred from a vulnerability discovered in the summer of 2015 that was acknowledged by Adobe in an open bulletin. The vulnerability, which Adobe patched in four days, allowed an attacker to take control of the affected system.

While in retrospect this might seem like a speedy resolution, the whole ordeal left a real blemish on the perceived use of the technology. This lead to many seeking alternatives when it came to video streaming and other use cases. In fact, IBM itself pivoted to a largely HTML5 video player solution in 2016.

Consequently, it’s not surprising that other aspects of the service that previously used Flash would eventually be upgraded. Today this includes the chaptering, thumbnail creation tool and the cloud based editing and trimming features which are all work without Flash now.

This update also includes with it a new UI for the features, with each using a new, clean editor bar for better seeking and positioning. In addition, the trimming functionality also includes new shortcuts such as the ability to play from the start or play the last 5 seconds. The thumbnail tool has also been improved, now offering a larger preview area to make it easier to select the right moment in the video to represent the asset.

The ability to edit an asset online offers a lot of advantages for streamlining workflows and speeding up the delivery of assets to be available to end users. The fact that it’s non-destructive helps it to function as part of a collaborative experience as well, where multiple individuals can edit assets knowing these changes can be reversed at virtually anytime. In addition, moving these features away from Flash opens additional opportunities to use them as well, across more devices and setups.

Wondering how to streamline your overall corporate video strategy? Register and watch this Simplify Your Corporate Video Strategy webinar to learn about workflows from your video management teams.