Streaming Your Way to Marketing Success

Marketers across industries, from Fortune 100 companies to small businesses, are facing the same problem: How can we rise above the noise and get our message through to our audience?

A recent study by the University of California, Davis, revealed that the average person is exposed to 100,000 words every day — the equivalent of an entire novel. It’s more challenging than ever to deliver a message that not only engages your audience, but that they’ll retain and recall later.

This is the challenge that Ustream’s David Gibbons addressed in our webinar “Streaming Your Way to Marketing Success,” co-produced by MarketingProfs.

Watch the webinar recording to learn 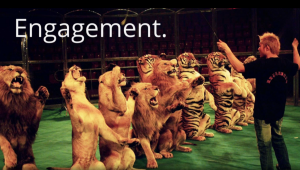 Audience engagement is key to getting your message heard and remembered.